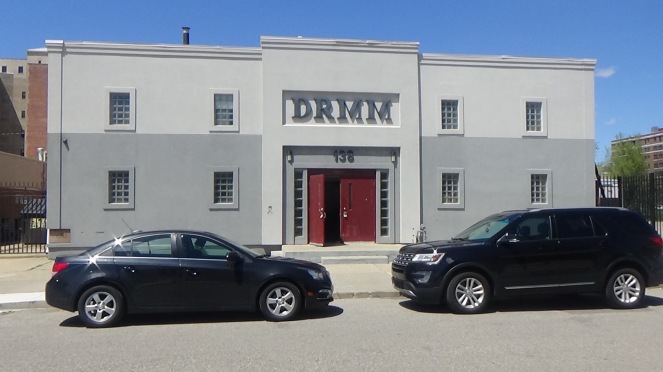 Detroit Rescue Mission Ministries: One of many buildings located throughout the city of Detroit, location 138 Stimpson St. Photo: Whitney Bryan

Mental illness is often overlooked, because of that it’s not properly treated, causing other issues in a person’s life. Most people aren’t diagnosed with a mental illness until something unfortunate happens, or there’s a major change in a person’s life, like jail or homelessness. The American Psychological Association (APA) reports that rates of mental illness among people who are homeless in the United States are twice the rate of the general population.

“I never wanted to admit that mental illness was the underlying cause of what was going on with me. Sometimes, I am still not comfortable talking about it,” Carolyn Suttles said. Carolyn spent a lot of her past in the streets. She was addicted to drugs and spent time in jail. “Being out there, you don’t really think of the consequences or repercussions. It was just about being a part of the fast life, and doing it around people like me,” Suttles said.

Mental illness makes people feel crazy. Many people never talk about how or why they feel different. Instead, drugs and alcohol become treatment instead of the person receiving proper care. Victoria Adewale, Dianne Ritchie, and Sarah Everhart Skeels wrote a great article called African-American and African perspectives on mental health: A pilot study of the pre and post- colonial and slavery influences and their implications on mental health. In this article they mentioned that substance abuse in the community has been linked to increased mental health disorders; however, most do not receive the appropriate services that they need. Sometimes, people aren’t able to be assisted because services aren’t in reach, affordable, or they’re full. “I spent a lot of my younger years on the streets. I was homeless, and in and out of jail. I knew I had to get myself together for my kids because they deserved a better mother. I was clean for over a decade, but once issues started coming up, memories and feelings of the past came back. Today, I realize that was my mental illness.”

In an article by Henry J. Steadman, Suzanne M. Morris, and Deborah L. Dennis called The Diversion of mentally Ill Persons from Jails to Community-Based Services: A profile of Programs. They mention that a major proposal for appropriately treating people with illness who have been arrested is to divert them from jail to community-based mental health programs. Detroit Recovery Project (DRP) was founded in July 2005. DRP is a private non-profit corporation dedicated to supporting recovery, which strengthens, rebuilds and empowers individuals, families, and communities who are experiencing co-occurring mental illness and substance abuse disorders.

“The program is effective, in my opinion, because I’ve seen so many people benefit from it,” Rickey Kelley, a Peer Support Recovery Specialist for DRP, said. Detroit Recovery Project offers cognitive behavior therapy, 12-step programs for drugs and alcohol, family re-integration, employment training, AIDS and HEP testing, and much more. “DRP is located in a community known for a lot of issues, but the organization is consistently evolving and creating new agendas to aid their cause to combat the issues, focusing on meeting everyone’s needs,” Kelley said.

Detroit Recovery Project Inc: One of the many locations located in the city of Detroit, location 1121 Mc.Nichols Ave. Photo: Whitney Bryan

Not all programs are effective or work for everybody. Everyone’s need for assistance is different. Sometimes programs aren’t able to help. K. Bost grew up with a mother addicted to drugs, in and out of different programs, hoping that one day her mother would be free from addiction.

“I remember when I was younger and my mother stayed at Harbor House for a six-month program. I was young when we went to the meeting as a family and it was nice. My mother stayed clean for a few months but was right back on drugs. I credit that to her program just ending with no out-patient support,” Bost said.

Phillip Simmons founder of Pure Recovery started this program to help men transition into life after going through treatment. Pure Recovery has been very effective in helping many men, and even assisting some with long-term employment.

“I spent a lot of time in and out of jail, and on drugs. I never really thought about my family, just about how I was going to survive and get to my next high. It wasn’t until I got older and became a part of Project Recovery, that really helped me out greatly,” Vernon Bryan said. Vernon is no stranger to the system and how it works. However, instead of continuing down the same road, he is now using this knowledge to help other men like him. 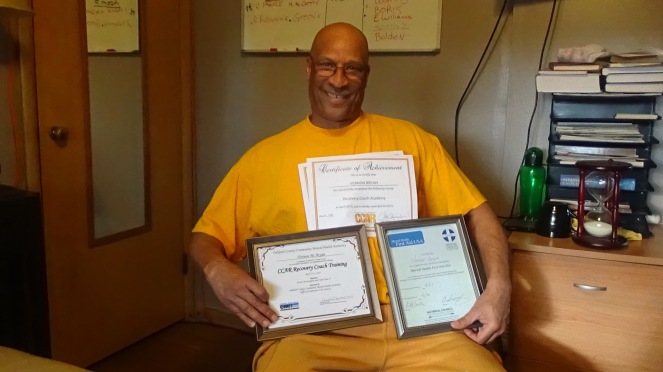 Vernon Bryan posing in his office with certificates, making him qualified for his work. Photo: Whitney Bryan

In 2014, more than one-fifth of the homeless population suffered from a severe mental illness. The most common three are schizophrenia, bipolar disorder and severe depression, which are all manageable with proper medication. According to the U.S. Department of Housing and Urban Development, mentally ill homeless people are the hardest to reach and the toughest to treat. They often self-medicate with drugs or alcohol, which causes them to fall more into the illness instead of getting the proper treatment that will help with change. This has been an increasing issue since the 1970s in all major cities around the USA. 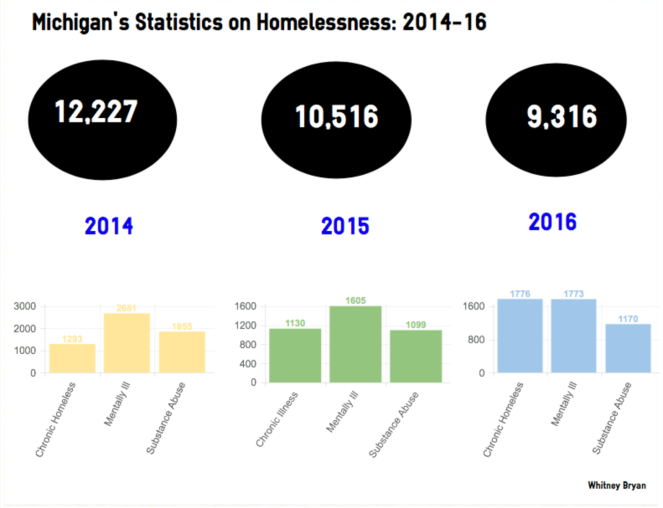 Although it seems that the number of homeless people in Detroit seems to be out of control, Michigan is on the list of states reporting the largest decrease in homelessness since 2015. This is strongly credited to community outreach programs and the help of many volunteers. Detroit Rescue Mission Ministries is amongst the others mentioned that lead the city in community outreach, as well. With many different programs, and partnering with several different churches in the city of Detroit, DRMM’s plan is to service more people in 2017 than the following years. “Detroit Rescue Mission is a dynamic organization that responds to the pressing needs of men, women, and children. We are embarking on relevant and viable projects aimed at helping them gain the stability, sobriety, and self-reliance they need,” C. Paschal Eze, Director of Spiritual Life and Public Relations, said. 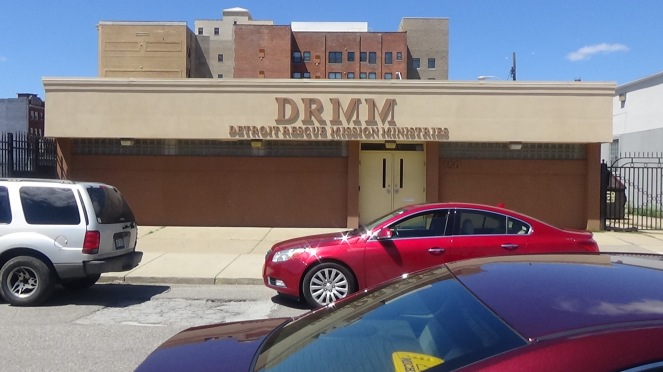 It is time to make a difference in your area so that Michigan can continue to be on the list of states with decreasing numbers. Join organizations like Detroit Recovery Project, Detroit Rescue Mission Ministries, and many others to save our streets.